In addition to working on thesis this last year I participated in a Zbrush workshop at school to create a 3D printing ready action figure. This was my second year in a row being selected for this workshop and both years were definitely a ton of fun, challenging, and overall huge learning opportunities,

These were my two initial concepts, ended up going with the bottom because my concept for the year before was a fairy girl and I wanted to do a huge muscly abomination for a challenge. 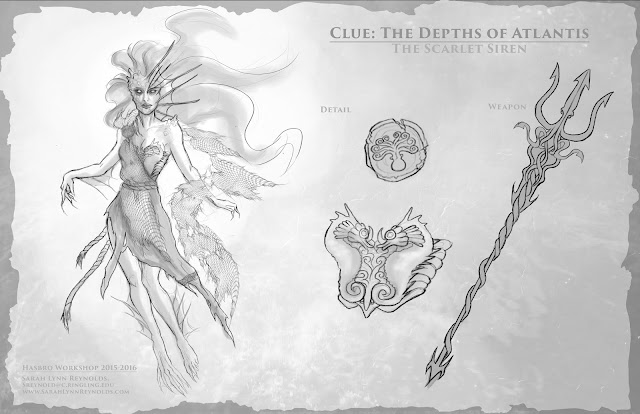 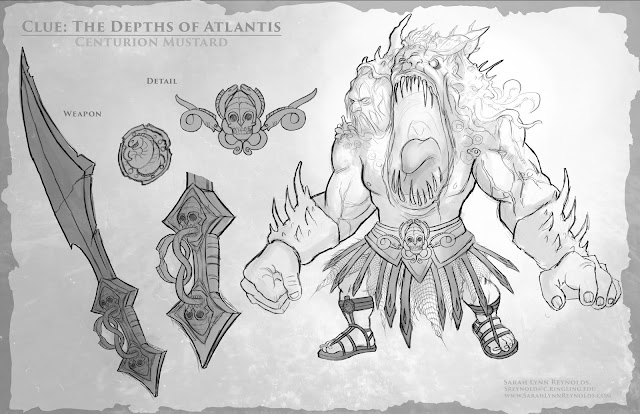 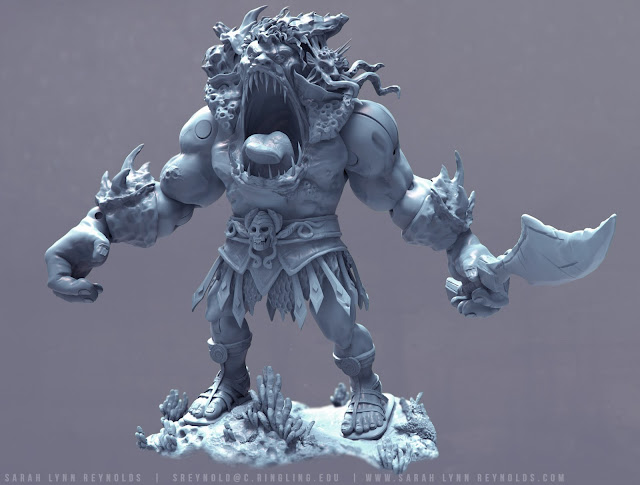 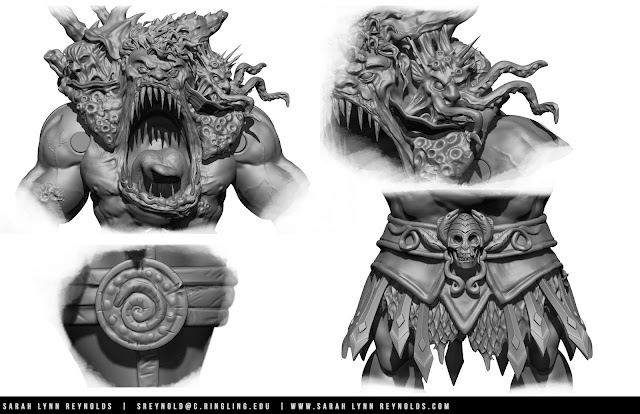 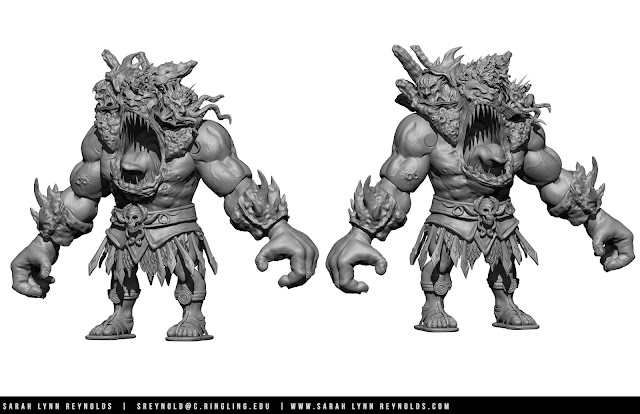 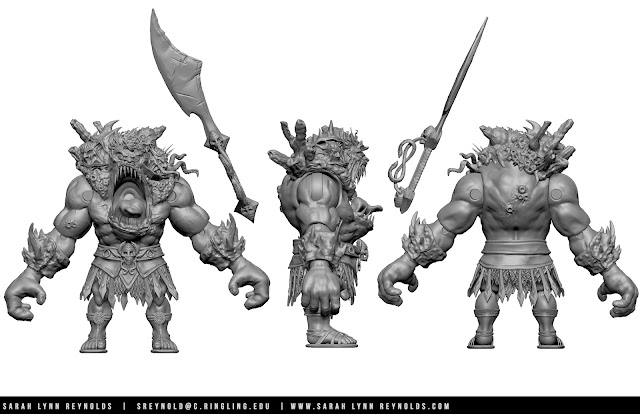 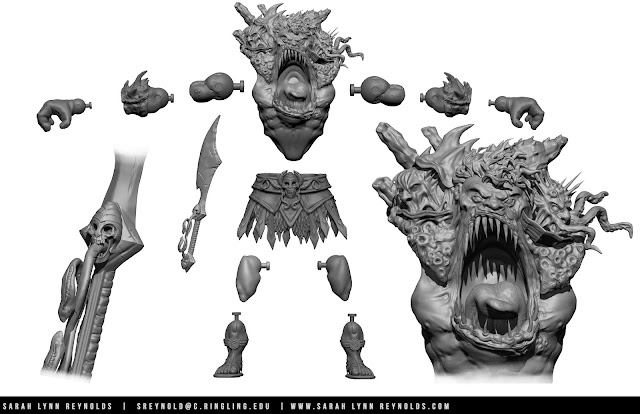 This one is random but I loved the way this material rendered out in keyshot, but it didn't catch enough detail to be used as my turn around so I experimented and made a crazy graphic background for fun. 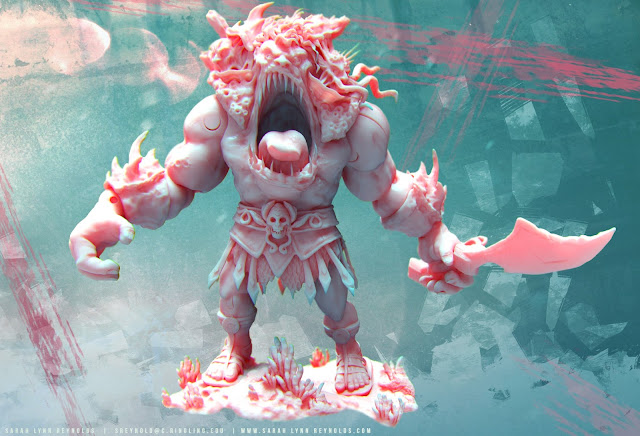 Posted by Unknown at 1:18 PM No comments:

We finished thesis this past week and will be releasing the final trailer soon, but in the mean time here's my final renders and my process for the horsemen sculpts.

Final Renders: (These are keyshot and zbrush renders to show off the sculpts, in the actual thesis trailer they're composed in Unreal Engine 4 and rendered in in real time.) 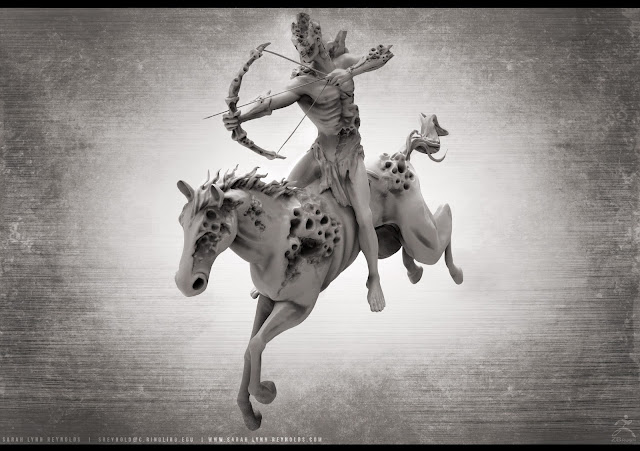 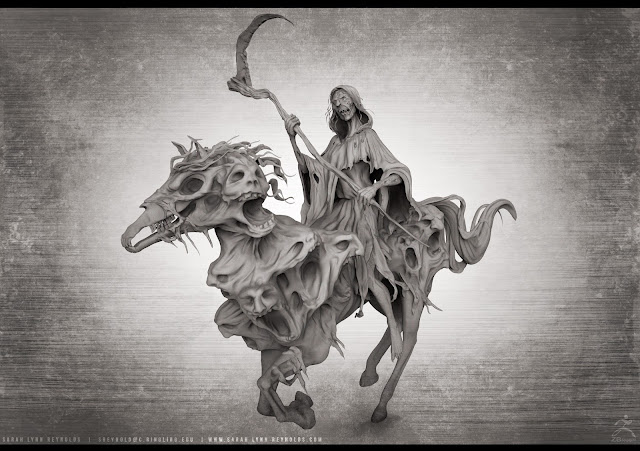 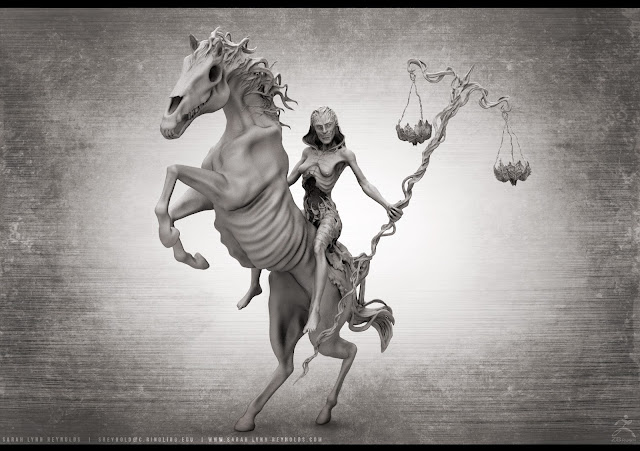 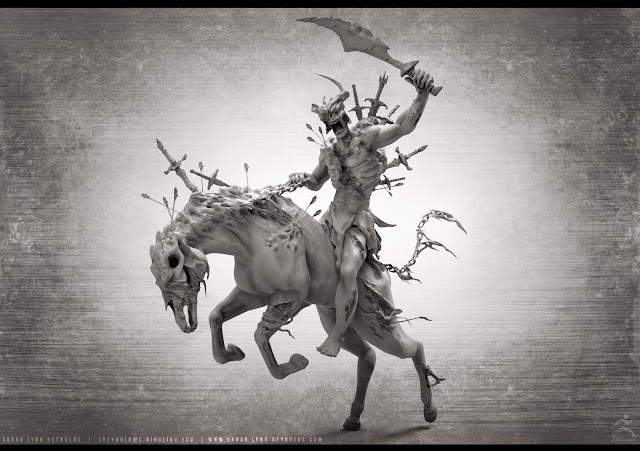 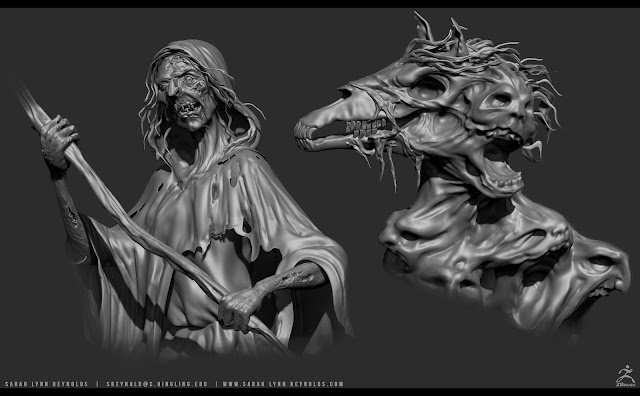 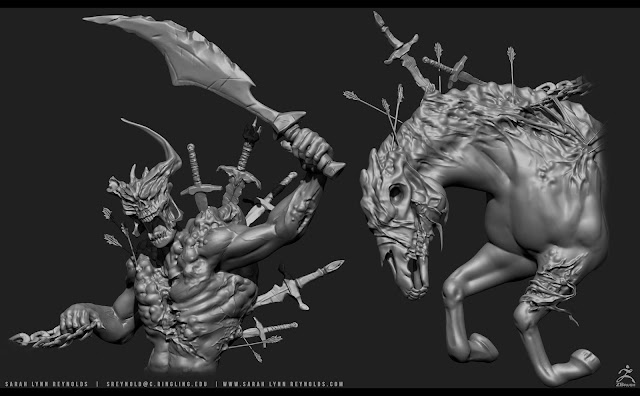 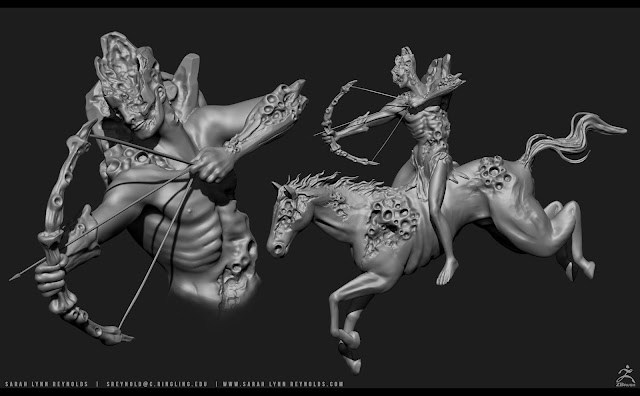 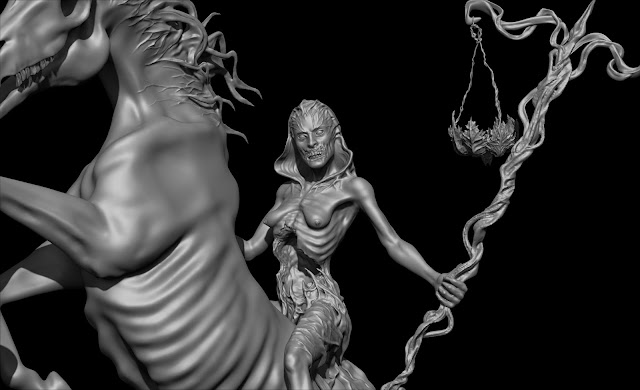 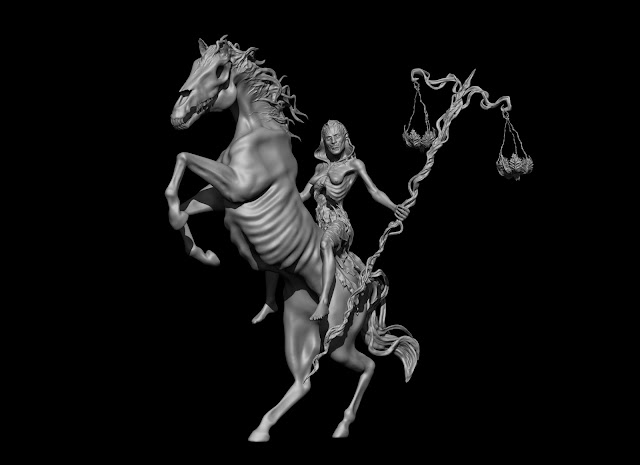 Originally the idea for showing the horsemen in the trailer was going to be accomplished by creating them as 2D illustrations and then use parallax techniques in After Effects for animation. Similar to the trailers for the game Hearthstone.  However, after playing Dying Light and seeing the intro sequence the idea evolved. I decided to create the horsemen as high poly 3D sculpts composed with a more graphic background similar to Victorian style etching. The etching style was chosen as The Last Judgement, our thesis idea, takes place in the late 1800s when etching was popular for printing. Initial VERY quick and dirty sketch when I was considering more of an Arthur Rackham inspired style. This is the only concept sketch I did for any of the horsemen, the rest were designed as I was sculpting in zbrush.

After the idea switched to 3D I needed to figure out a way to quickly iterate on poses. On top of these four I was sculpting an additional 2 fairly complex characters, so to stay on a realistic timeline I took base meshes from Zbrush and ran them through mixamo to get a character rig. Mixamo also has a rigged horse mesh. After getting my models/rigs from mixamo I took the characters and horse into maya and manually posed the characters and adjusted poses taken from Mixamo animations for the horses.

Here's an early result of that process, some of the poses obviously changed quite a bit after this initial take: 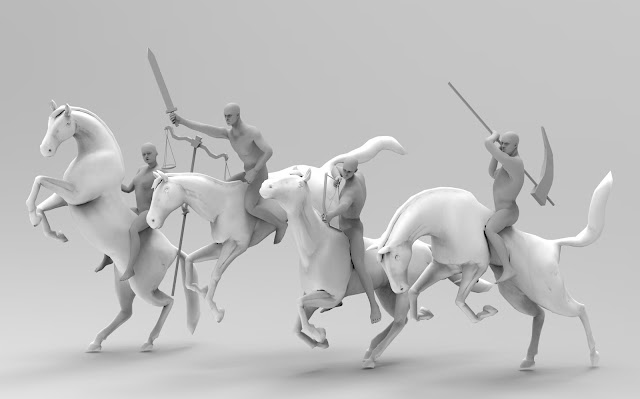 Compared to the final sculpts:

So the process for setting up the scenes in UE4 was fairly simple. I created a simple etched sky texture for the backgroud plane. Then for props I took screenshots of a few individual assets my partner and I had created in our environments and ran a photoshop filter over them to get the etching style. These were then set up as alpha planes and imported as assets into the engine. Some assets like the grass and a few piles of rubble are fully 3D assets we also used in the environment, their texture has just been desaturated to fit the scene. Fog, soot, and fire particles were added to the scene for more atmosphere.

To create cohesion and add an extra layer of polish I found a pen and ink post process material on the unreal engine 4 marketplace and replaced the textures and settings with my own to get the final look.

And here's some progress shots of Death in the UE4 scenes. 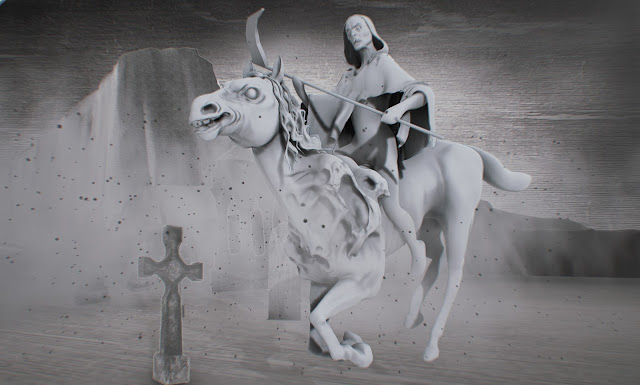 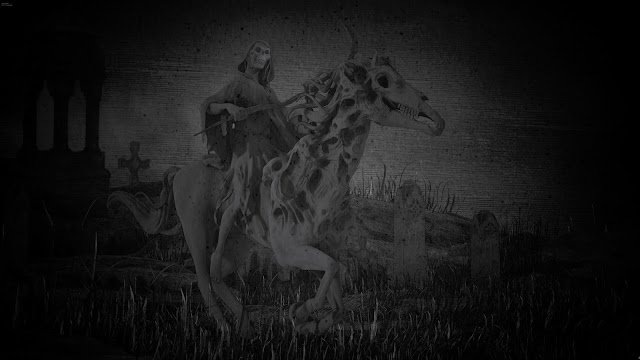 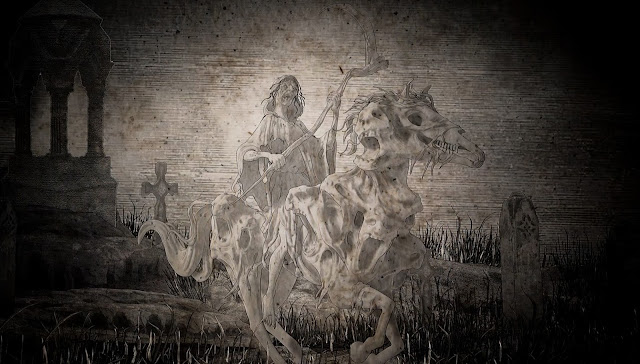 And here are some screenshots of the rest of the horsemen in the trailer: 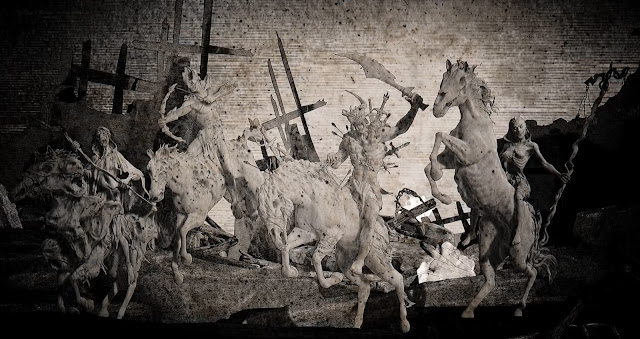 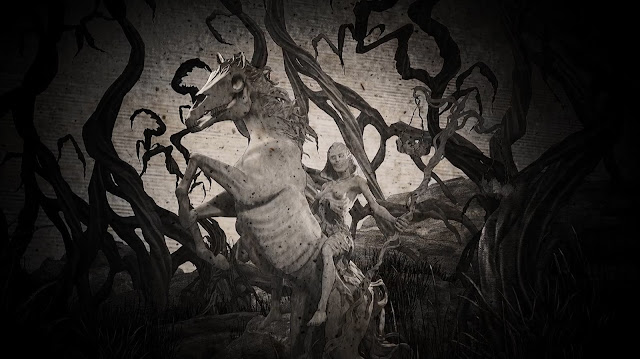 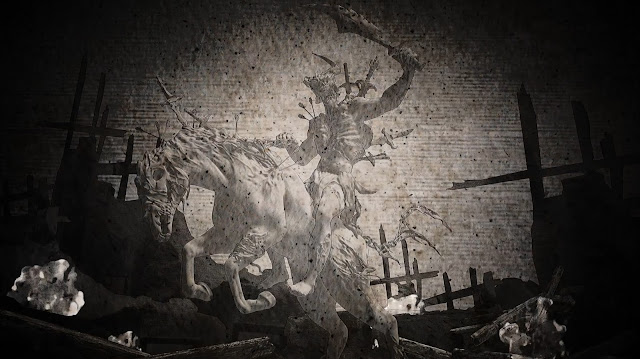 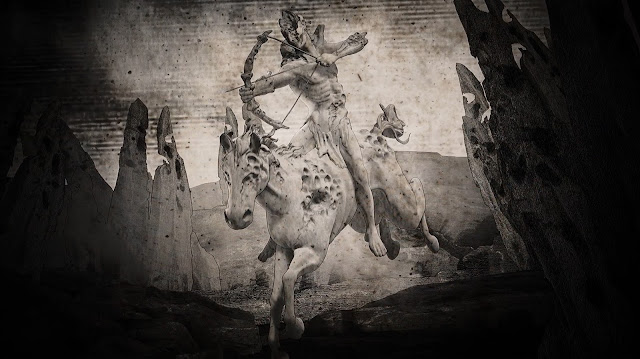 Posted by Unknown at 7:37 PM No comments: