I worked with Mike Marra to greybox a playable boss battle and two cinematic environments. We also were creating a pitch and a trailer to present to the class and prepare us for the next semester which will be very pre production heavy.

And here's the presentation:

https://docs.google.com/a/c.ringling.edu/presentation/d/1DdDH3UcTM4bjS-89EdDoqfVqawMwwxvbr6V7yZsWjk8/edit
Posted by Unknown at 11:05 PM No comments:

For our workshop we're required to include at least one particle system. I've only ever created one other particle system before and it wasn't really my favorite thing to do in the world. I'm happy to say I'm having a lot more fun learning particles for this particular assignment. I'm creating a fire system, which obviously isn't the most unique system in the world.. But it's been helpful I think to learn particles in general.

My system is very far from good right now, but it functions as a supplement to the workshop itself. I doubt I'll be taking very close up screenshots of the actual system, but I'd still like to refine it further eventually. Not sure if I'll make that happen by the project deadline, but maybe when I have some free time to polish up the level. I looked at the fire in the effects cave to build the embers and heat wave effect, but I followed this basic tutorial for the actual flames:
Pub Games Basic Fire Tutorial

My process was basically observing, messing around with numbers in Cascade, and following that tutorial linked above.

When I get more in depth with this system I'll probably follow this tutorial as it's really in depth.

We had a progress crit for our boss characters today in Drawing class. I posted my original designs here: Boss Concepts

Here's a color rough for my Hindu DJ. I think if I were to name her I'd call her Queen LaShiva. 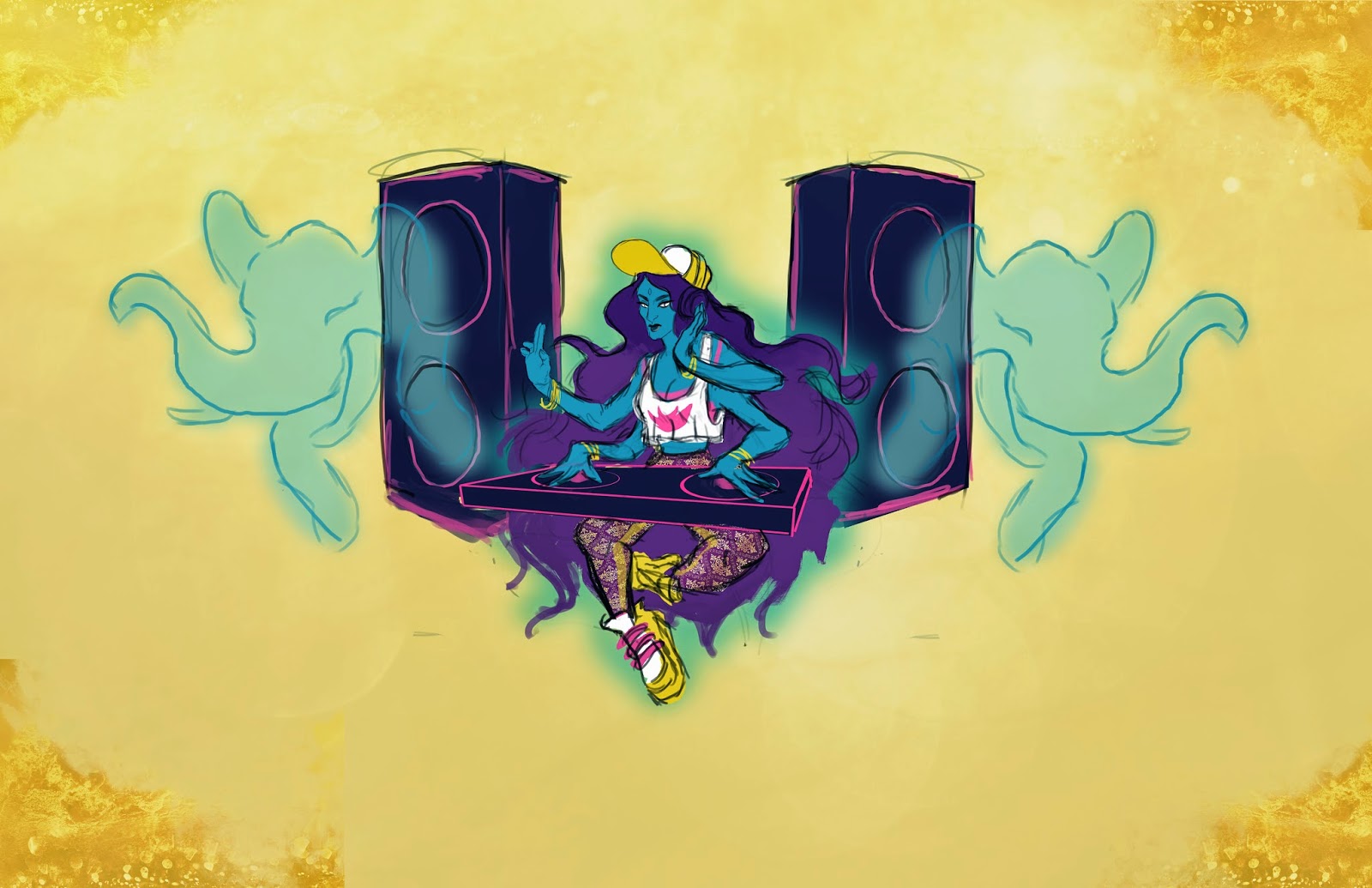 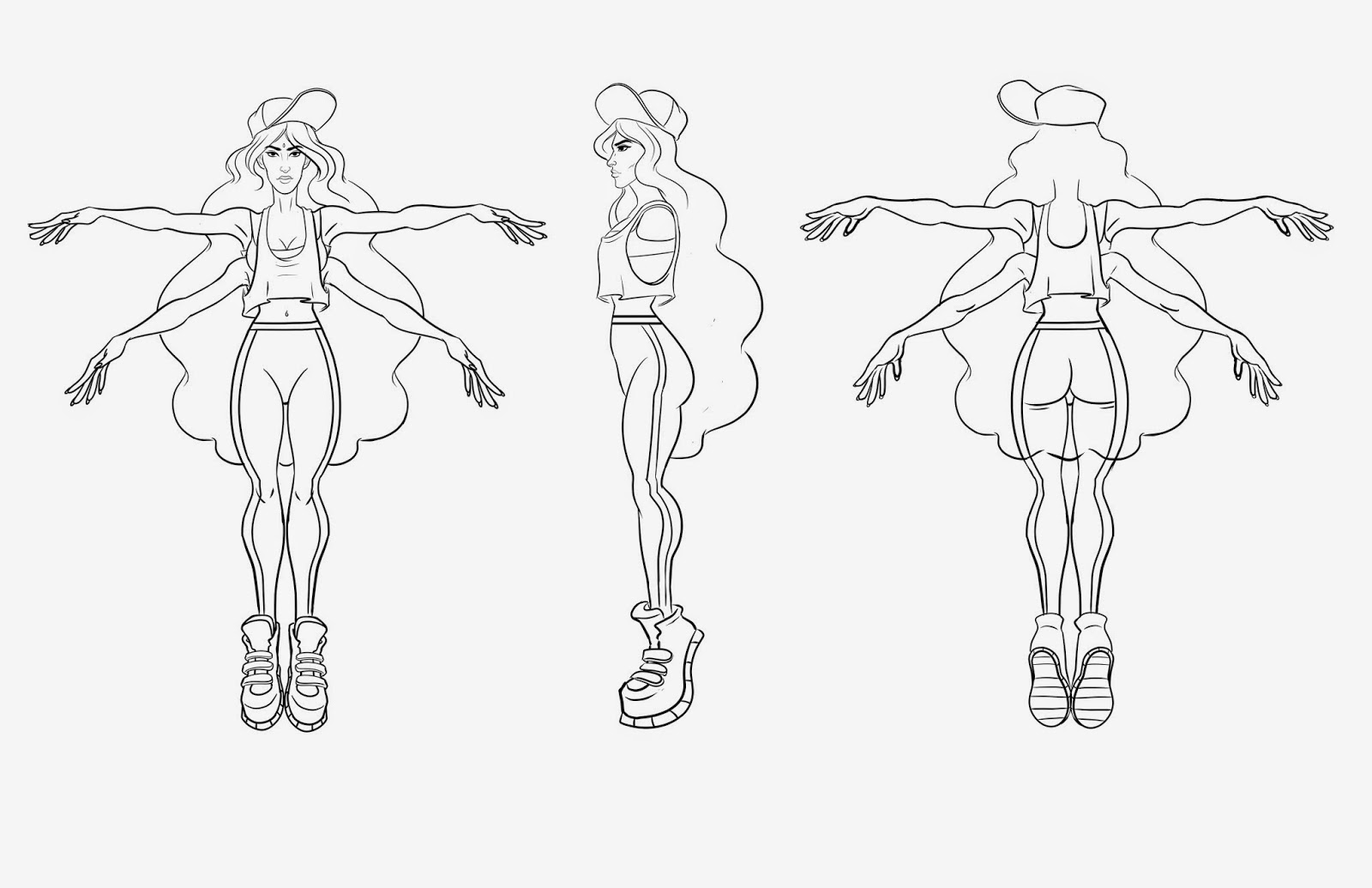 I have a long way to go with the design, but it's a fun character. I'm excited for next semester when we can actually create these in 3D. The effects for the spirit elephants are probably going to be the most challenging part of the whole thing.. But it'll probably be a valuable thing to learn.
Posted by Unknown at 10:51 PM No comments:

For the last few weeks in DFA and 3D we've been working on a workshop space. My partner Mike Marra and I are creating two dwarven spaces that would exist within the same mountain. Think Erebor. In a game environment the spaces would be used as crafting areas. I'm making a jewelcrafting workshop and Mike is making a forge.

Here's my DFA concept. I'm not completely happy with the way my painting turned out for this but I learned a lot in the process. I'm definitely not as strong with environments as I am with characters. 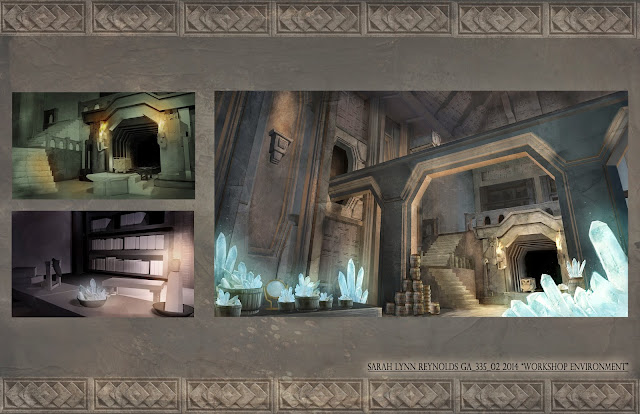 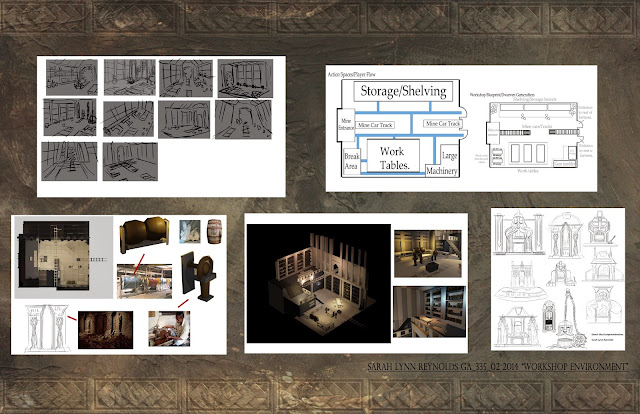 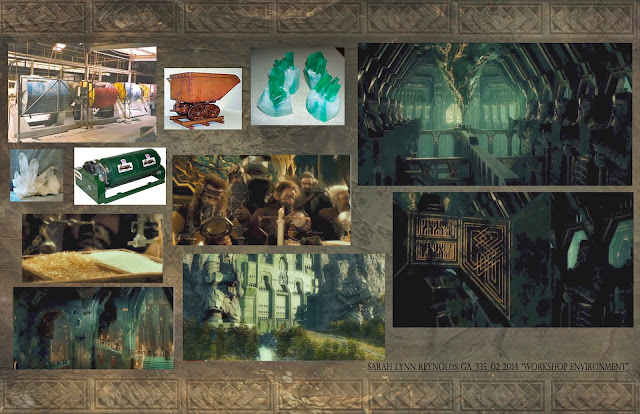 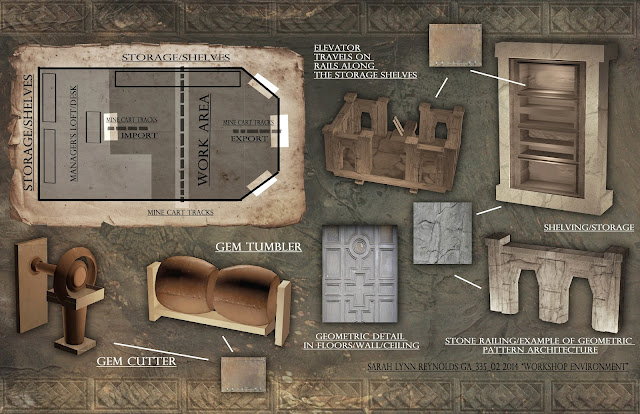 And here's my 3D blockout. Definitely need to get lightmaps on stuff, (Among other things). But right now I'm finishing up the modeling for the space. 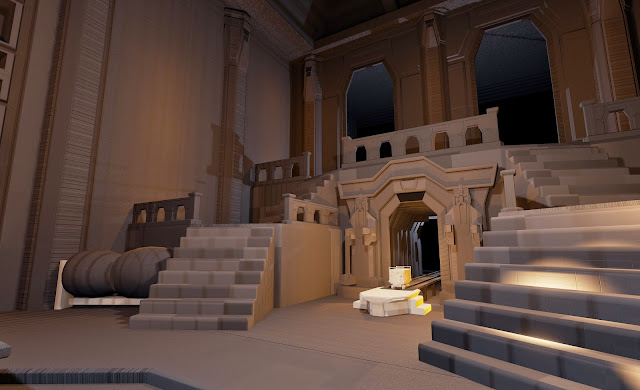 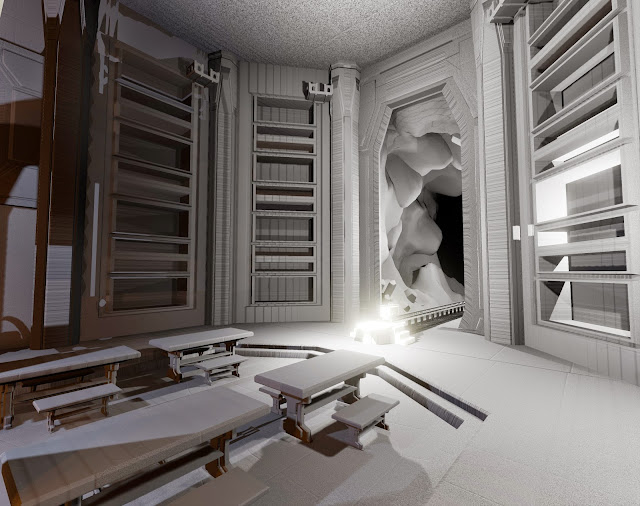 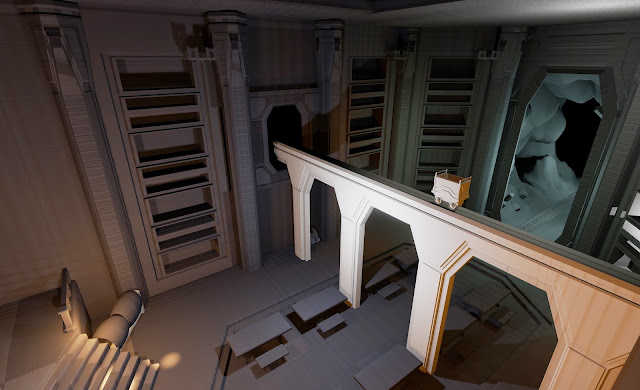 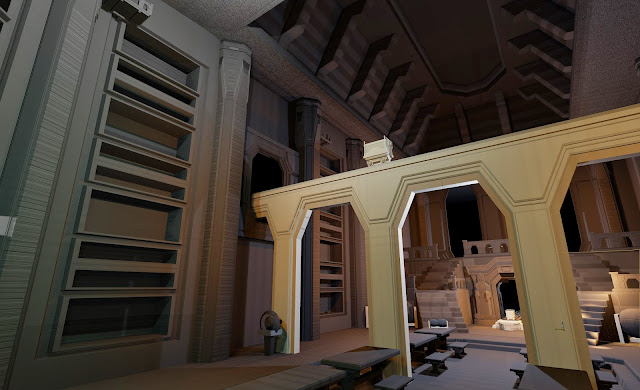 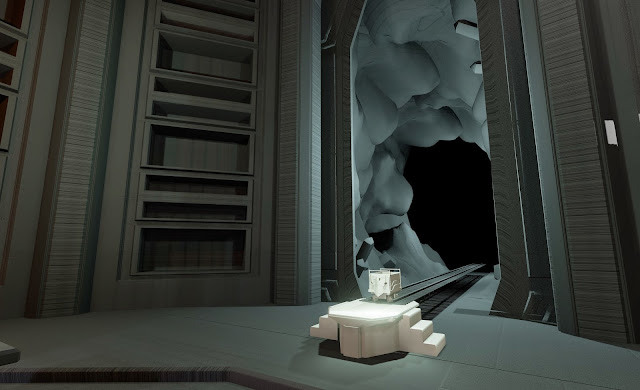 Posted by Unknown at 6:37 PM No comments:

Our next project in DFA is designing a Boss character. Next semester we'll be modeling and rigging these, but for now our assignment is just to create the character.

Our first step was to generate 20 thumbnails, I'm really terrible at thumbnails, which is obvious but it was helpful to just jot some quick ideas down

. Second, we were to generate 5 rough sketches based on the initial 20 thumbnails. After a small class critique we picked the drawing we would pursue as our boss character.  My first design is a straightforward vampire/creature boss lady, second was my favorite and the favorite of my classmates. She would be a boss for a rhythm game, and is based loosely on the hindu goddess Lakshmi, but an urban interpretation as a mystical DJ, third I was thinking of as the keeper of limbo, fourth is my interpretation of the Mayan goddess Coatlicue, and 5th is my interpretation of Poseidon, the last two would fit into god of war style games. 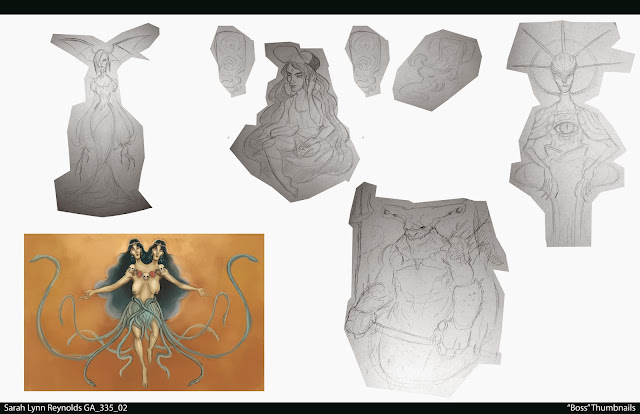 And here's the reference sheet I put together for DJ Lakshmi 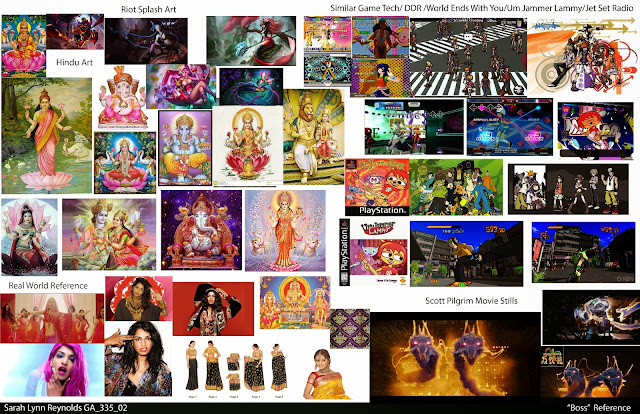 Posted by Unknown at 3:15 PM No comments:

We were tasked with finding and researching a camera move to incorporate into our trailers for our upcoming boss battle assignment. Mike Marra and I are doing a kraken for our boss, so I thought this scene from pirates of the carribbean was appropriate. I especially like the shot that puts the camera directly above the ship, with the tentacles shooting up. I think that'd be an effective shot for our trailer.
Posted by Unknown at 5:34 AM No comments: