The print and play game of Hydras draws from the Greek mythological story of Hercules and the Hydra. One of my favorite ways the game reflects the myth through its mechanics is the use of torch cards, as the Hydra was defeated in the story through clever use of a torch. 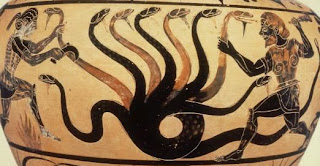 Out of the print and play games I play tested I found Hydras to be the most successful. The rule book flows well, is simple, clear, and makes it a breeze to learn the game. The art direction feels cohesive and fun. Overall it is a very well put together simple but elegant game, and most importantly it's fun to play!

The primary goal as laid out in Hydras' written rules is, "Grow the most heads before the deck runs out". To elaborate on this each Hydra head is equal to one point, and the player with the most points wins. Included with the game are 12 optional extra "labor" cards which have point values of one, two, or three, that can be subtracted or added from or to a player's point total based on whether or not they complete the goal described on the card by the end of the game.

Hydras' goals are successful because they are concrete, achievable, and rewarding. In relation to concreteness the primary goal of earning the most points by having the most heads at the end of the game is clear and not hard for players to grasp. The extra goal cards are also easy to understand, and add variety which makes the game more complex and rewarding without overwhelming the primary goal. The goal of the game feels achievable, as players are in control of their choices in the game; building something and defending it, or using strategic attacks to take down other players. In the end seeing all of these choices pay off creates a sense of accomplishment that is rewarding.

The balance between long and short term goals during game play is also successful. Overall, the players are working towards the end goal of having the most heads, but during the game they are setting smaller goals for themselves by attacking opponents and  defending their hydras from oncoming attacks, or if there's a torch card placed on their hydra, possibly setting a goal to remove it.

To start the game players shuffle and deal each player one hydra body card and four cards from the deck.
The player that ends up with the Hydra body with the star both starts and signifies the end of the game.

The "Star" player gets the first turn at the start of the game. After the cards run out the game is played until the star player's turn is reached. Then, each player gets one last turn before the game ends.
Starting with a body card that has two potential neck paths gives players a choice in how they proceed with building their hydra. The 4 deck cards players are initially dealt also gives enough options to begin strategizing right away.

The end also works in this game as there aren't really any actions within the game that players could take to reasonably end the game by themselves. Going until the cards run out gives players time to play without worrying about an opponent taking an action to end the game, while also making them more aware of utilizing their cards frugally and efficiently. 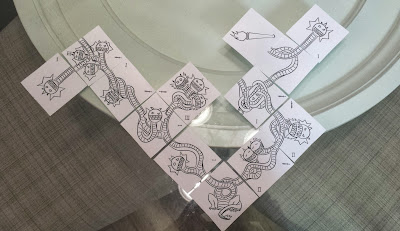 Utilization of space is one of the key elements that makes Hydras unique. There is no board and players build onto their hydras using neck cards, which means that space in this game is in a constant state of flux. Hydras is an example of continuous two-dimensional space. Adjacency is an important aspect to Hydras' use of space as well as the rules. Neck cards must match up neck-to-neck on all sides that are adjacent to other cards. Similarly, torch cards must be played against the open part of a neck card.

Objects:
The objects of the game include: 4 Hydra Body cards, 54 neck cards, 12 labor cards, and 6 torch cards. Though they are part of certain neck cards sometimes the swords and shields could be considered their own objects as they function independently of the neck cards they occupy.

Here are some examples of neck cards. The first starting to the left is exclusively a neck card with no sword or shield and is worth one point. The second has the sword option, which means it can be used as a sword or played on a hydra as a regular neck card, it has a value of two points. The third has the shield option, and may be played in defense of an opponent's sword attack. This one has a point value of three.

Body Cards: Starting points that include two paths to start building your Hydra from, one of these cards has a star, the rest do not.

Labor Cards: These goal card attributes are unique to the individual card.

Torch Cards: Torch cards don't have really any specific attributes, but they do have states of play within the game. 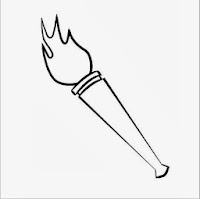 Body Cards: The state of the body card is unchanging throughout the game.

Neck Cards: In draw pile, in player's hand, in play attached to hydra body, attached to different neck cards from one, two, three, or four directions, paths open, paths closed, some paths open, some paths closed. adjacent to torch card, not adjacent to torch card, in play being used as a sword card, in play as a shield being used to defend a sword attack, in discard pile.

Torch Cards: In draw pile, in play adjacent to neck card, not in play in player's hand, in discard pile.

This game makes the player feel strategically in control. There is of course some chance to the game as no one really knows what kind of cards they will draw but the actions the player can take in terms of building, attacking, and defending make them feel in control of their game play.

I've already touched on the actions a player can take by analyzing the various objects, attributes, and state changes within the games but the operative and resultant actions in the game are as follows:

Operative Actions - Drawing cards, Discarding cards, playing neck and torch cards in the various ways I've detailed above, attacking with swords, using a sword card to edit parts of your own hydra, defending with shields.

Resultant Actions- Drawing and discarding cards makes the game progress faster to the end. Playing a neck card can result in closing off a certain path, adding more points to the player's point count, creating a new path, or elongating an already laid down path. Playing a neck card as a sword can change the composition of the player's or opponent's hydra, and make opponents lose points. Playing the shield card in defense can prevent loss of points. However, both sword and shield cards can result in waste of points as they get discarded after they are used. Playing torch cards can block opponent's from adding onto certain paths of the hydra.

Basic Rules
-Players take turns moving to the left of the starting player.
-During a player's turn one must either play or discard and draw back up to a maximum of 4 cards.
-Neck cards must match on all sides with previously placed cards
-The player with the most points at the end wins, points are gained based on the number of heads a player has on their hydra and potentially labor cards if they are in play.

Swords, Shields, and Torches
-Sword cards can only be played on opponent's neck cards that have two or less cards adjacent.
-Sword cards can be played on your own hydra regardless of the number of neck cards adjacent.
-For sword plays torches are treated like open spaces and not observed as an adjacent card.
-After playing sword cards they must be discarded along with the parts the sword cut off or the shield used to block the sword.
-Torch cards are played at the end of a neck card. Until the torch is removed no further progress can be made on that neck.
-A torch can be removed with a sword just like any neck card.
-Shield cards can be played out of turn sequence to deflect a sword attack

Optional Labor Cards
-During set up labor cards are dealt to each player depending on the number of players, 2 Players: 5 cards, 3 Players: 4 cards, 4 players: 3 cards
-Players must keep at least one of the labor cards they are dealt
-Labor cards are kept private to the individual players they are dealt to.
-At the end of the game the point count on the labor card is added to the player's total point count or subtracted based on whether or not the card has been completed.

Each player's hydras are public knowledge within the game. The cards players draw and are given at the beginning of the game are private knowledge. It is also public knowledge when a player attacks with a sword or defends with a shield. Like I mentioned in the rules, labor cards are also secret to the individuals they are dealt to until the end of the game when points are being counted. Knowledge that the game knows that is private from the players would be what cards are in the draw pile, or what cards are in the discard pile if a player decided to discard on their turn rather than play a card.

This game strikes a good balance between chance and skill. There's enough chance and surprises to keep things interesting, but enough strategy that the players feel at least somewhat in control of their own fate within the game. There is also a variety of ways players can play strategically using attack or defense.

The one issue I had with this game related to the surprise element. Being that I played with two players I felt like the game's strategic cards were too prevalent. It made playing offensively seem like a waste as it was so easy to deflect an attack. I think this could be remedied for 2 players if the 54 card deck was reduced somewhat, or simply by playing with 3 or 4 players.

Mental Skills
Hydras requires strategic thinking in terms of how to place one's neck cards, if they should take the offensive by attacking opponent's hydras and laying down torch cards or by being defensive and focus on building their hydra.

Social Skills
Offensive and defensive play can also be included in the realm of social skills. Playing a particularly offensive game towards other players or perhaps one in particular could make opponent's retaliate and give them a vendetta for the rest of the game.