Winter break has ended and I'm back at Ringling for my second semester of Sophomore year as a game art and design student. I'm going to miss sleeping but I'm super excited about the overall project we're working on for this semester. We're building a racing game! My programming, game design, and 3D modeling class are all geared towards this sole project. Each student is creating a car, a player, and a track design. The concept my class as a whole chose is the idea that the track is inside a pinball machine. Think the Waluigi pinball level from Mario Kart. 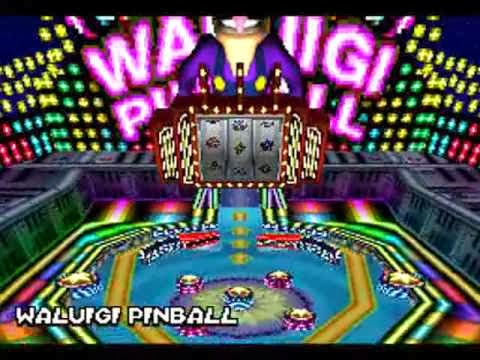 Because the concept our class chose is so similar to this level, and there are a lot of dynamic mechanics unique to this track this is where I began my research/brain storming process for my own. The track is a lot of fun to drive but I also want to make sure that mine stands out from this level.

My favorite mechanic in this track is the release of the pinballs, the timing in which they are released and the imminent danger of being crushed adds a feeling of increasing risk and drama to the track. The player completes the first lap with no pinballs, the second lap one is released. In the third, there are two to deal with. The interaction of the pinballs with the rotating bumpers in the open area of the track also heightens the tension and fun for the player.

We were also asked to study stunts from movies. One stunt that immediately gave me ideas for my track came from one of my favorite action movies of all time: Death Race. I promise I like it for more reasons than this: 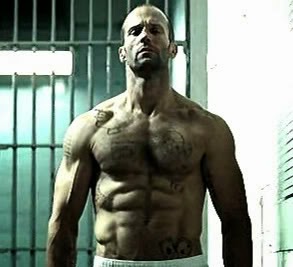 Anyways! Here's the stunt that got my wheels turning:

Racing games have a lot of obstacles just with factoring other players in, but the dreadnought adds a whole other level of terror. I think incorporating something similar would be really fun in my level.

Here are some of the mechanics I've started planning out for my level. 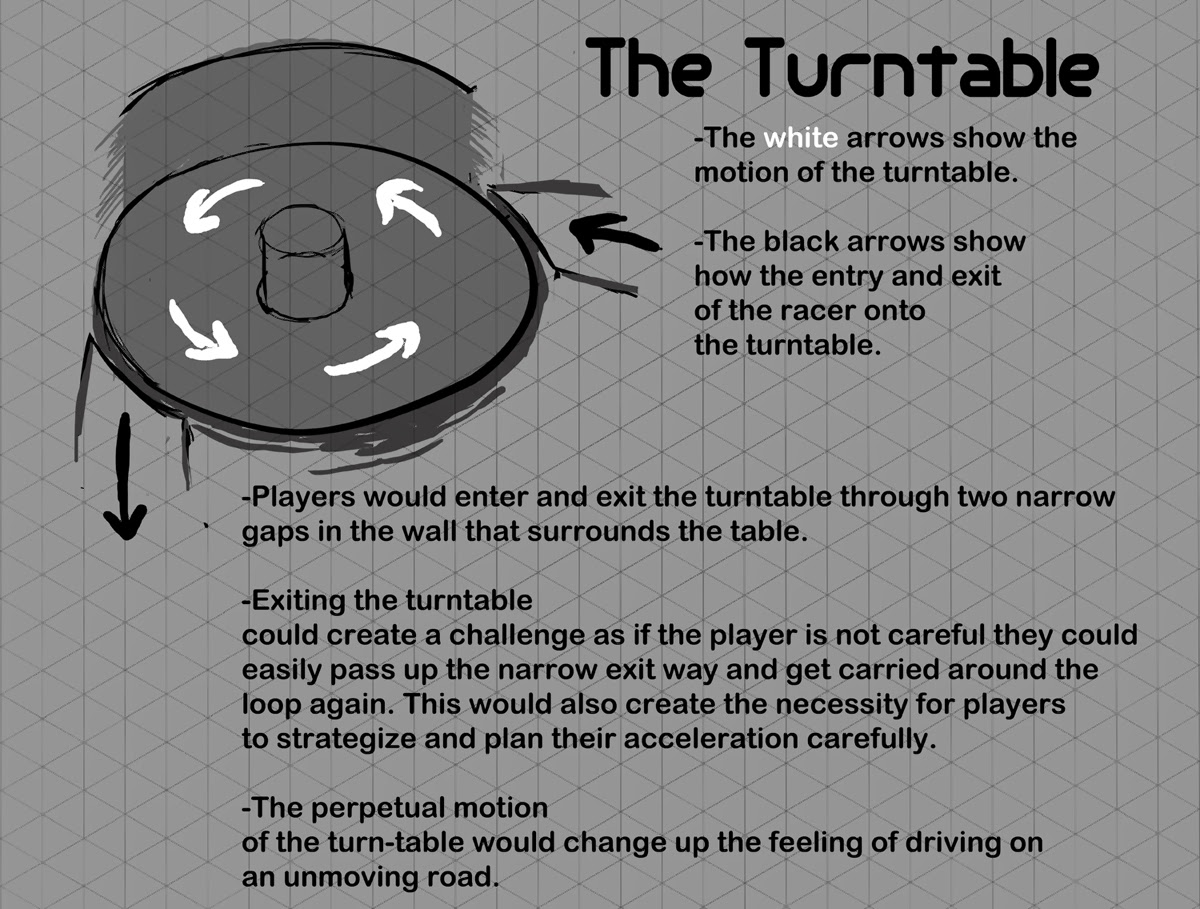 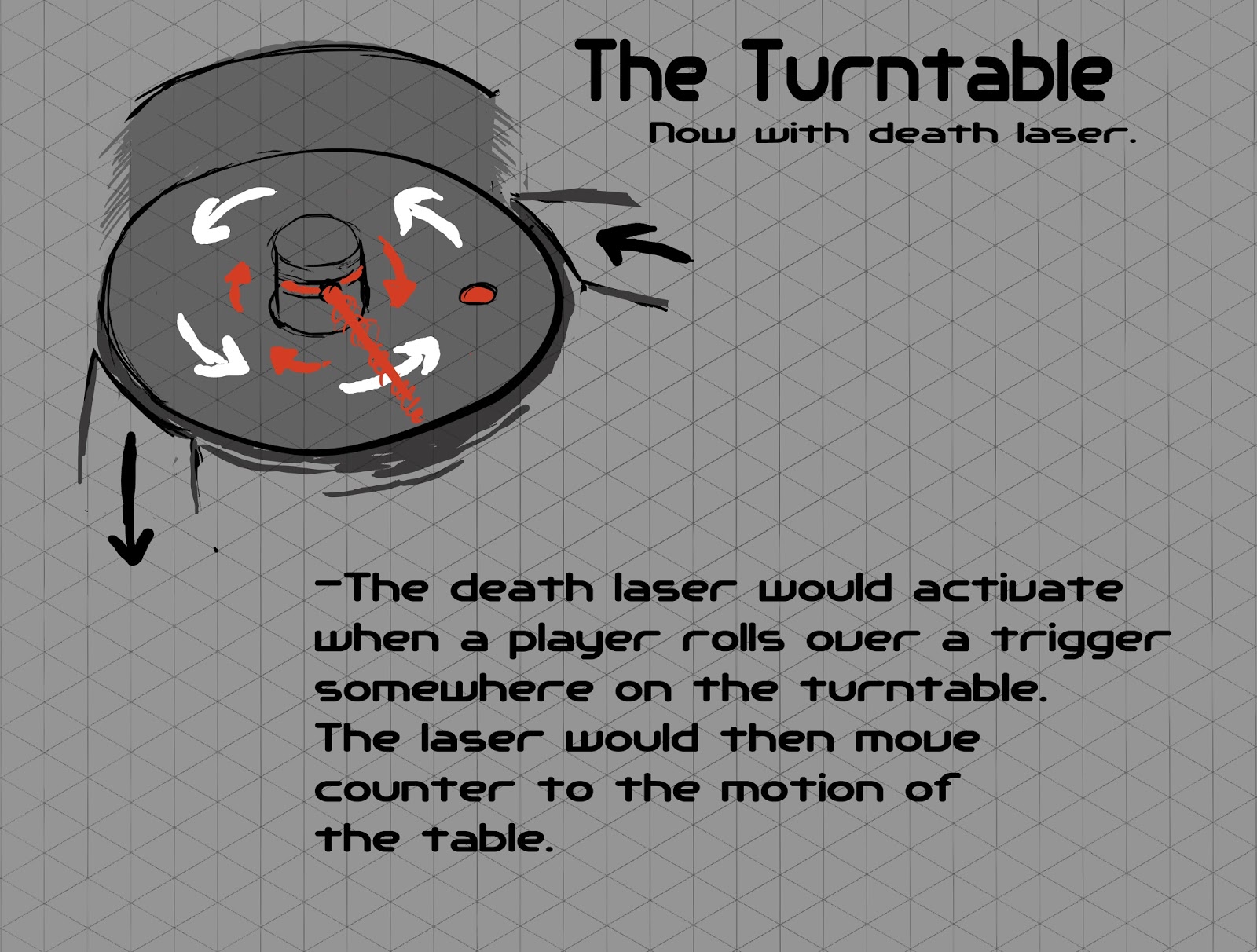 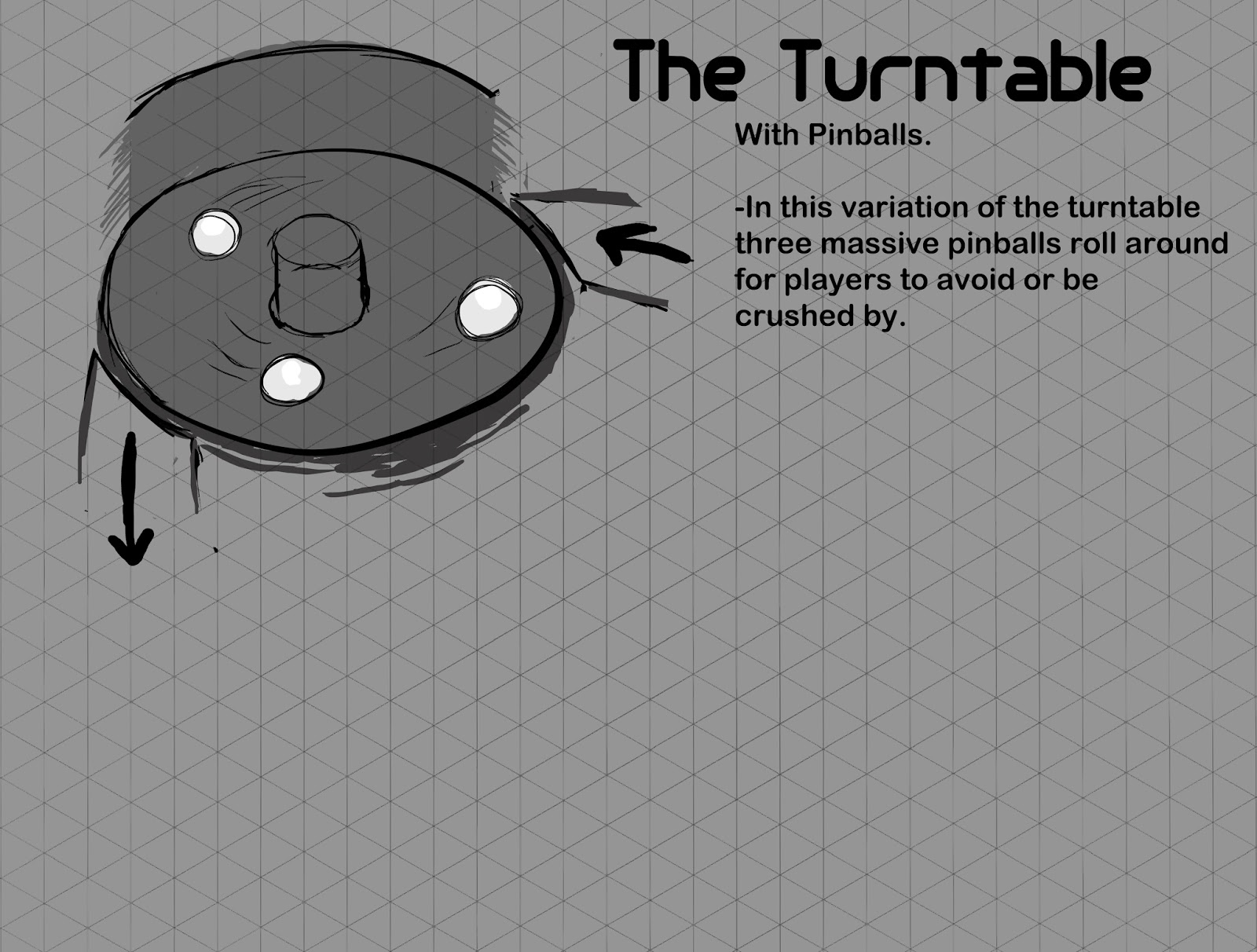 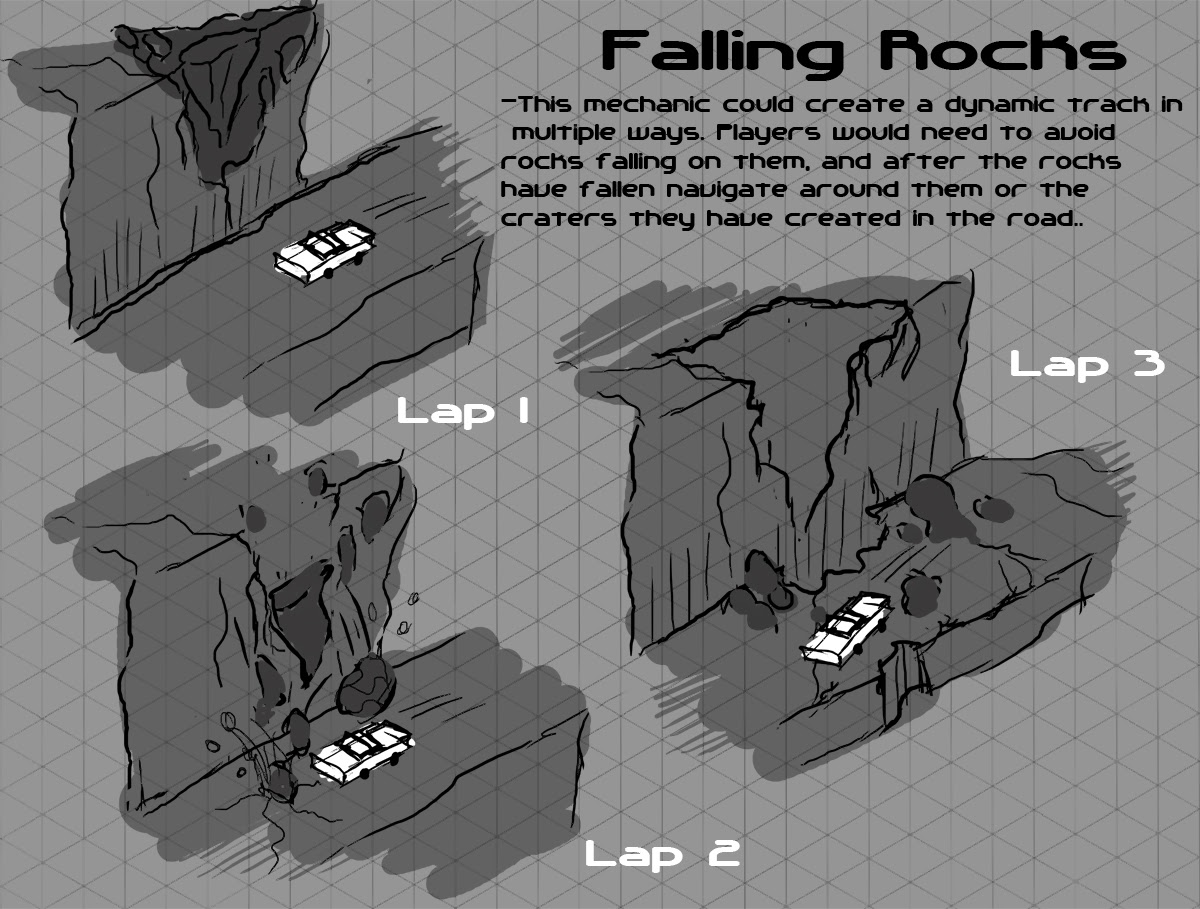 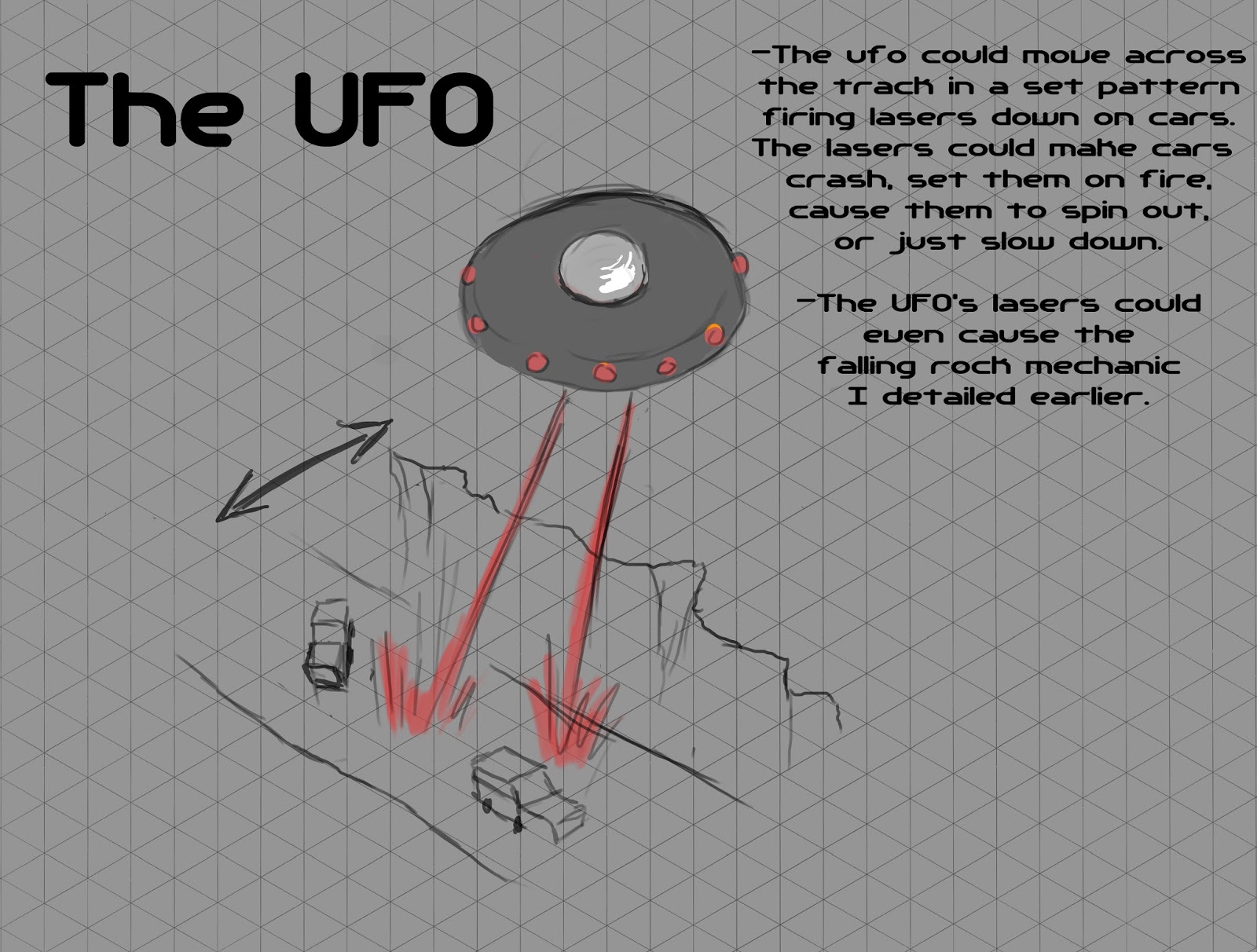 This mechanic is how I would adapt a stunt like the dreadnought into my own level. 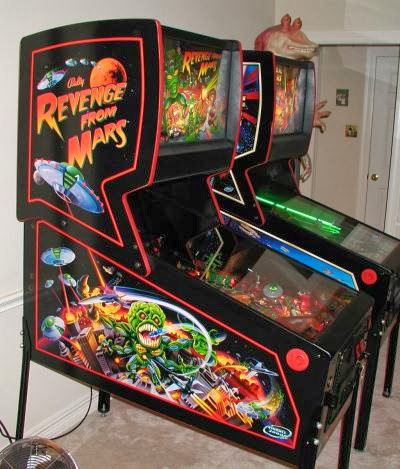 Concept Statement behind the level:
"Race the invasion, survive the night."

It was challenging to come up with a sci-fi story line while still keeping in mind that everything is going on inside a pinball machine. It's like a conceptual nesting doll. I decided a good compromise between the sci-fi and pinball theme was an alien invasion. Then I started thinking about the environment in which the aliens would be invading. I decided it would be fun to have the invasion happening at night while the player drove around in dessert canyons. Because I mean, aliens = roswell = dessert and canyons and stuff, right? UFO sightings also usually occur at night, so I figured that would enforce that idea. I also believe that the color scheme of the dark night with the bright lights of a city on fire and UFO lasers in the distance reflect the aesthetics of a pinball machine, so it seemed like the two concepts married well. The story of the invasion will unfold as players race around the track 3 times. with conditions on the road getting progressively worse each lap. 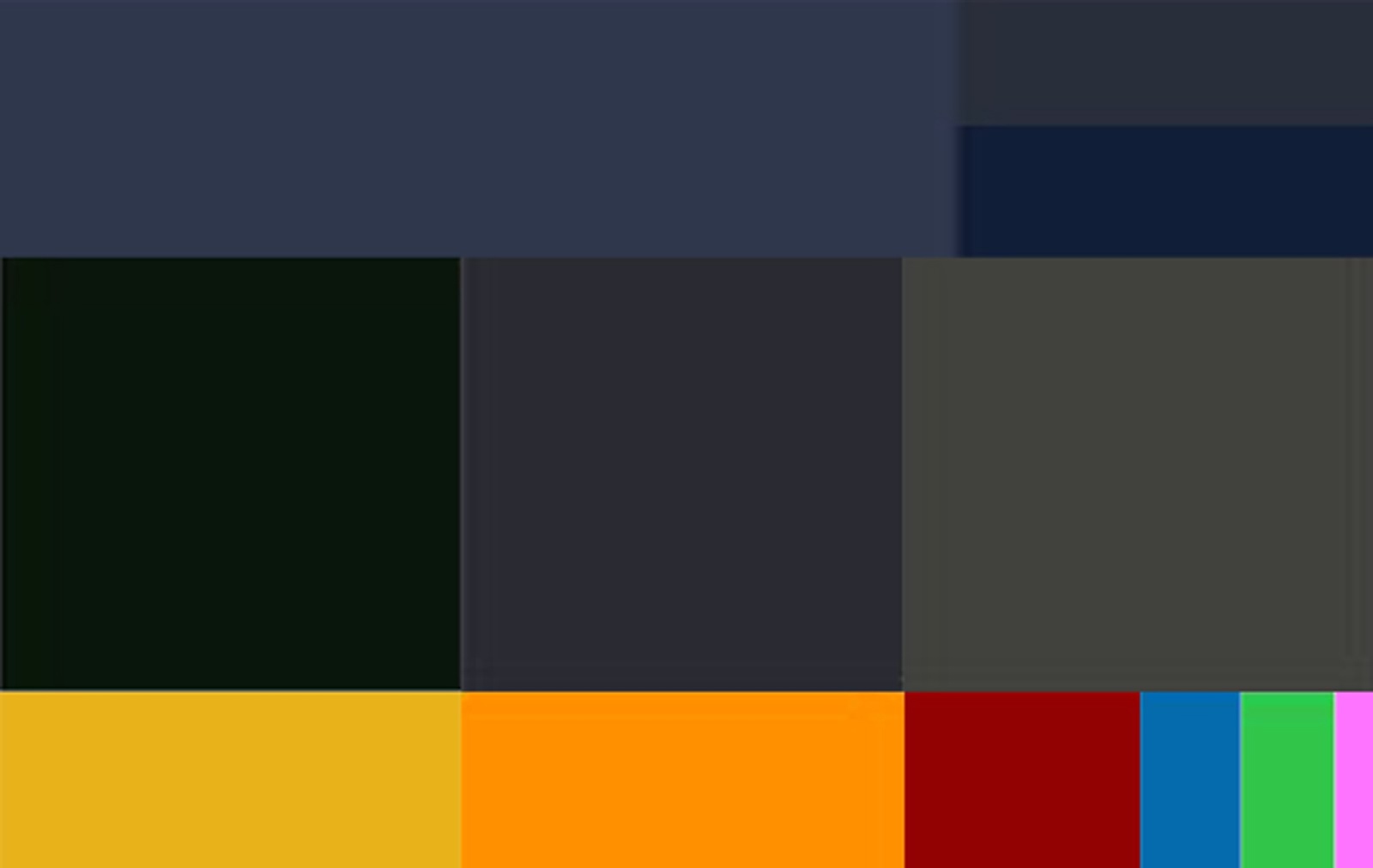 The palette will be mostly dark blues and greys with pops of bright, mostly warm colors with some accents of cooler colors.

This is the layout I have in mind for the level. Specific landmarks, mechanics, and important points in the game are labeled by numbers which I will elaborate on below. 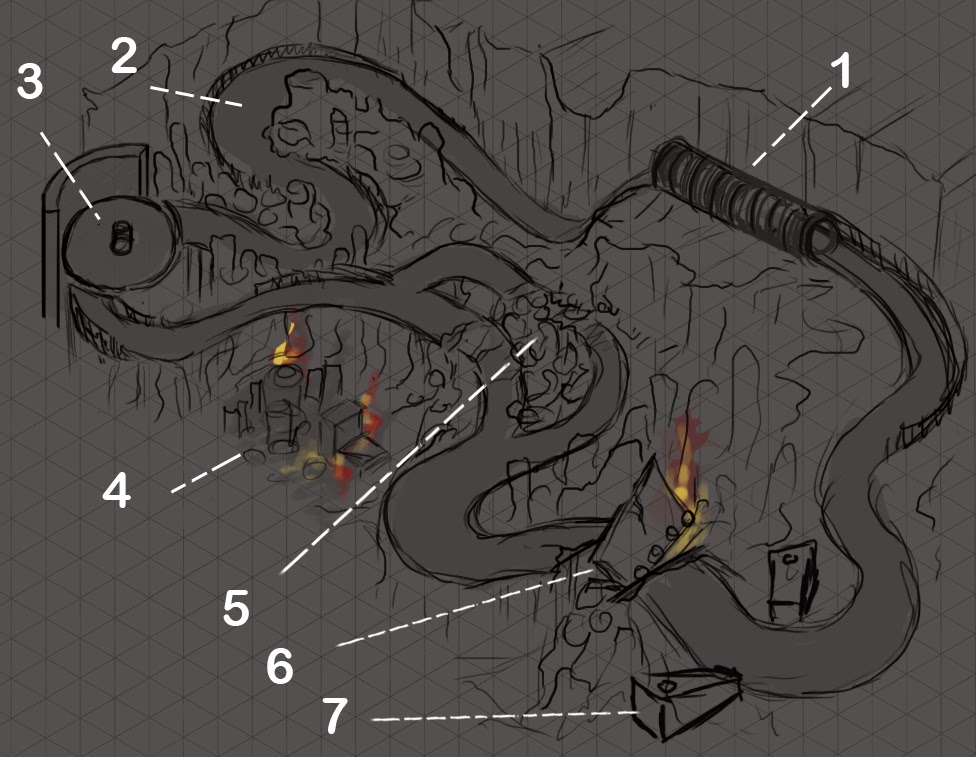 1. This tube area is where the player will start/finish a lap. The tube represents the tube that the pinball shoots out of in a pinball machine.  It might be interesting to have an acceleration power-up for players here to further enforce that.

2. Two is a big ramped S shape that will challenge player coordination and ease them into more challenging things to come.

3. Three is the turntable mechanic I mentioned above. I think to further enforce the theme of the level I may turn the turntable into a spinning "crashed" ufo.

4. After and if player's survive the turntable, they're shown a vista of the city post-invasion in the distance. This is one of the major landmarks for the level.

5. Here the track splits in two, and where the falling rock mechanic comes in. In the first lap there won't be any damage to either road way. In the second lap as players pass through rocks will begin to fall. In the third, the rocks will have fallen creating obstacles.

6. This is a landmark and also kind of a finale to the track. Here the players must jump over a broken road and a fallen flaming billboard.

Other notes:
Players will be directed to stay on the track sometimes by highway rail guards, other times there may be the possibility of falling off the level as I think that kind of heightens the sense of danger and excitement.