Thumbnails for Concept Painting and Solutions

We're currently in the very early stages of creating an illustration that tells the story of our game. Here are some thumbnails I did based off of my game's concept. I was mostly focused on composition as opposed to specific stylistic elements as I'm still deciding what the minions should look like. 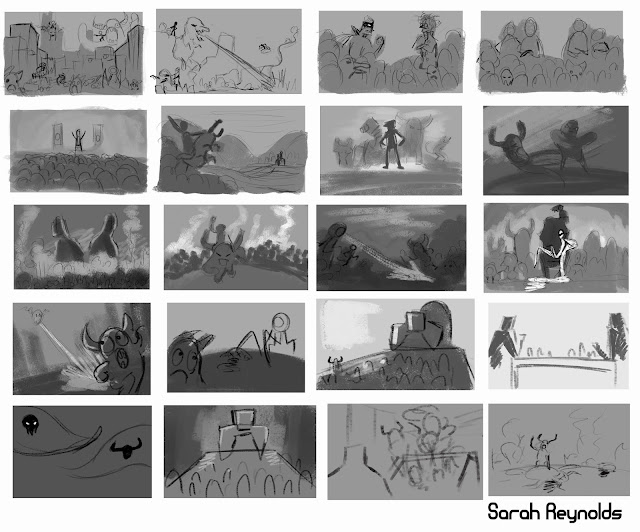 As for rule changes I fixed a few of the unresolved issues I mentioned in my last post by adding a mechanic called "war phases". Here's how I have these phases currently described in my game's rules:

War Phase Triggers:
In the game there are three war phases. The first war phase is triggered when a player adds their 8th minion to their army. The second is triggered when the 16th minion is added. The final war phase occurs after the minion cards in the face down draw pile runs out and each player has taken their final turn.
How War Works:
In the first two war phases the player who triggered the war phase by adding the 8th or 16th minion is awarded a 2 point bonus. There is no award for triggering war in the final war phase. The player with the highest score when a war phase is triggered automatically wins the round, and receives a bonus of 4 points. Second place earns a bonus of 2 points. Third place must remove one of the minions from their army and reduce their point count based on the value of that minion. Fourth place must remove TWO of their minions and reduce their point count based on the value of both of those minions.