At Ringling the sophomore Game art and Design students make our own print and play and board games as an assignment for Game Design class. For the research portion of this assignment we were asked to find a few Print & Play games and well.. Print and play them. 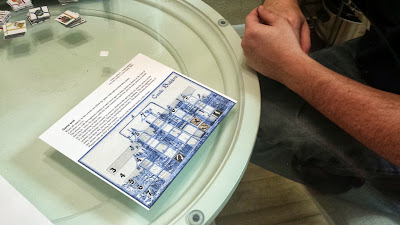 Castle Builders was the first game my friend and I play-tested. The concept behind Castle Builder's is fairly simple, you and the other player in this two player game are building a new castle for the king. The player with the most points wins. To earn points one either must have their "counter" or "building block" tile in the topmost position of one of the 5 towers or have the most "counters" in a row.

My friend's face after I won the first round. 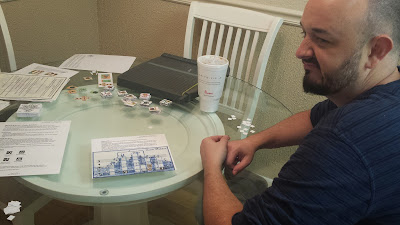 The simplicity and ease to learn this game was a big plus though Castle Builders had some major flaws. Certain special mechanics of the game are poorly described in the rules. The description for how the "Stop counter" tiles worked was worded too ambiguously, so my friend and I were not sure how that mechanic was intended to work. The special mechanics of the game in general could be more varied and interesting, as they were they felt too simple and bland. The balance of strategy and chance felt fairly even to me, but my friend found the game slightly too chance based. Overall I enjoyed Castle Builders more than the friend I played with. While the simplicity MOSTLY worked for me, I think the game might have been just a little too simple. I think it could have been a really great game had the special mechanics been a little more versatile and interesting. 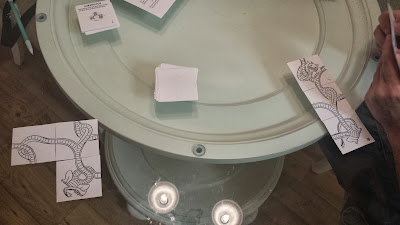 In Hydras the player starts with the body of their hydra and progressively adds necks and heads. Whoever comes out with the more hydra heads at the end of the game wins. Players can sabotage each other by cutting off and even torching the heads of their opponent's Hydra.

Hydras took a little longer to learn than Castle Builders. The mechanics were more complex, but ultimately that made the game more fun and successful than Castle Builders. Hydras rules were very clear and easy to understand. The fact that they were presented with pictorial examples really made it a breeze to grasp the basics of the game. I also really liked Hydra's art style. It was simplistic but in a fun way that worked for the game. 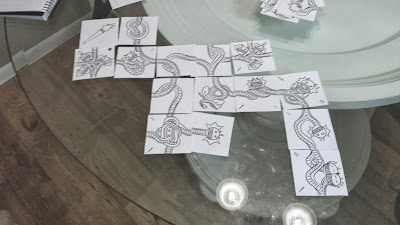 The one problem my friend and I found with Hydras was that the card distribution between 2 players was unbalance. We found that we both got too many of the "good cards" so strategizing and playing an offensive game was often unrewarding as it was too easy on either end to counter. If we had been playing with 3 or the maximum of 4 players I believe the game would have felt more balanced and had more of a rewarding element of strategy and surprise. 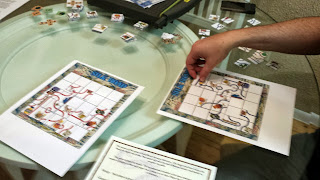 Silk Road was by far the worst game my friend and I played. That being said, I wanted to include it because I feel like I learned a lot about what not to do when creating a game. The idea of Silk Road was to create trade routes between the various locations on the board. In Silk Road each player gets their own board and the objective is to make as many paths between countries as possible. The number of connections you make gives you points. One player acts as the leader with all of their tiles flipped face down, while the other player(s) leave theirs spread out and face up. When the leader player flips a tile, the others find that tile and use it. I found this to be a really strange way to go about playing a game, and while it was a unique method it was one I don't think worked. I believe this basic mechanic could allow players to copy each other far too easily, which just means the game could get extremely nonstrategic and therefore even more boring than it already is (Though it would be hard for me to find this game anymore boring than I already did.) 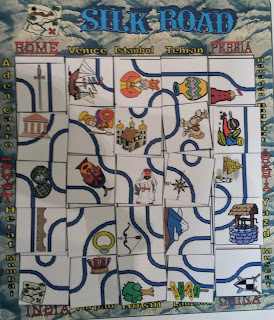 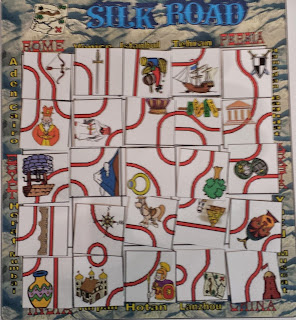 Overall the game just felt too simple. There wasn't enough action to keep me interested, and there wasn't enough interaction between players to make it feel fun as a multiplayer game. I could see myself replaying both other games I mentioned above, but not this one.